Today I would like you to introduce you to our second grandson. His name is Grant. He was a full term baby. He was the opposite of Gavan. Gavan couldn’t wait to get into this world and came 13 weeks early. Grant on the other hand was in no hurry to make his appearance. He went passed his due date. Grant is now 13 ½ months old. On Memorial Day weekend he started walking. How time flies.

Our daughter and son-in-law marvel at how fast this little guy has grown. He is now only about three pounds lighter then his bigger brother. Since Gavan was a preemie he did not gain weight as quickly. Grant out grows his clothes very quickly and now wears the same size as his bigger brother. It seems like we can’t keep his belly full, he constantly wants to eat.

He has the most adorable smile. And those big brown eyes will melt your heart. They sure have melted Mama’s heart. Let me show you a photo of him so you can see for yourself. 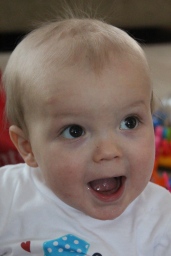 When he was eleven months old he started making these faces. Every time someone would say something to him he would make this face. It was hilarious, but he doesn’t do that anymore. He has moved on to doing other funny things. It is such a joy to watch them change and how quickly they change. 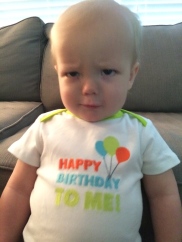 The other day we took the boys to a local park that has a splash pad and a train for children to ride. Grant had no problem playing in the fountains. We were so surprised because he wants nothing to do with the kiddy pool that they have in their back yard. Grant even was putting his face in the water. Gavan on the other hand was only interested in the train. So after a couple of hours of the splash pad we packed up and took them for a train ride. Not once, but twice. They really enjoyed their time.

I never cease to be amazed at the new things they do everyday. Being a grandma is even better then I ever expected it to be. Every kiss and huge they give me is so precious. What an amazing blessing!

Our first grandson was born 13 weeks early. He weighed 1 lb. 11 oz. He spent the first 3 months of his life in a Neonatal Intensive Care Unit. He was so small that my son-in-law could fit his wedding band on Gavan’s arm up to his elbow. Each day was a roller coaster ride emotionally for mom and dad. The doctor’s could not guarantee that this little boy would live a normal child’s life. But as each day passed Gavan got stronger and stronger. At one point he had to have a blood transfusion, but they said that is normal for premature babies. All his brain scans came back normal. His lungs got stronger each day. We were praising God for his progress.

Today he is three years old. He is still small in size, but he has a huge personality and is so full of energy. He is the cutest thing ever. He loves Disney movies and his first Disney movie was “Cars.” He would get so excited watching the cars race. Lightning McQueen is his favorite, but he couldn’t say Lightning so he would say LiLi. Between my house and his house we probably have over 75 cars from that movie. He lines these cars up in a row, side by side, all facing forward. He started doing this when he was somewhere around a year and half old.

Now that we live in North Carolina, only two miles away, I get to babysit them a couple days a week. So I am always looking for ways to keep them occupied. I have bought some puzzles of Cars and Toy Story. A couple of months ago I started doing these puzzles with him. I can’t tell you how much he loves to do puzzles. He is also good at it. He will sit at the kitchen table for hours and do one puzzle after another. In the beginning I would tell him where each piece would go, but now he almost knows where each piece goes. These puzzles are not the kind that you fit a shape into the right space. They are interlocking puzzles.

Gavan is very observant and curious. He also repeats EVERYTHING that he hears. When we do these puzzles I am always saying to him “good job” when he figures it out for himself. Now he tells us good job. Good job, Daddy; Good job, mommy; good job mama when we do something right. He also puts the emphasis in good job like I do. It is so cute.

Each day that I spend with my grandson is a new adventure. It is a great blessing and a great joy to be a grandma (Mama).

Have you ever heard the comment, “I am to young to be a grandma” or “I am not ready to be called grandma?” Those comments never came from my mouth. Throughout the years I have saved a number of my children’s toys knowing that someday my grandchildren can play with them, too. I even saved all our VHS Disney movies dreaming of a grandson or granddaughter curled up in my lap watching Jungle Book or 101 Dalmatians. I looked forward to the time when I would be called grandma. I looked forward to that little hand holding on to my hand, as we would take little walks. I had all these dreams and plans of things we would do when I became a grandma.

When our children graduated from college they had to move to other states to find jobs. I told my husband when our children get married and start having children I do not want to be a long distance grandma. If you are blessed to have your children lived close by after they get married and start a family don’t complain, it is a blessing. Our daughter was the first to give us grandchildren. By that time my husband was looking for a job in North Carolina were she and her husband lived. Finally he was offered a job and we now live in North Carolina, two miles from our grandchildren. Our son and his wife don’t have any children yet, but they are seeking work in North Carolina to be close to us. It has always been my prayer that we would always live close by each other and that we would all worship together every Sunday.

On March 30, 2011, our first grandson was born. His name is Gavan. He entered this world 13 weeks early. Weighing in at 1 pound, 11 ounces. We say that he weighted 27 ounces and was born at 27 weeks. When he starts to plays sports his number has to be 27. He is now three years old and a bundle of energy. He is a little guy, but is doing very well. He is so adorable and a stinker at the same time. Gavan became a brother on April 29, 2013. Grandson number two, Grant, was a full term baby. He is our little cuddly chunk. It won’t be long and Grant will be walking and talking, too.

We are so blessed to be able to see our grandsons whenever we want. I babysit them a couple times a week and sometimes more. We get to go do all kinds of things with them and we get to worship every Sunday together. By the way, I am not called grandma. It was difficult for Gavan to say grandma so he started calling me MaMa and grandpa is PaPa. It melts my heart to hear MaMa as he comes running in excitement with those big blue eyes and that sweet smile eager to spend the day with me. I am so blessed and thankful and looking forward to our next grand child, whenever that might be. 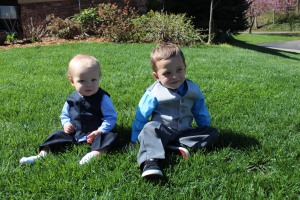